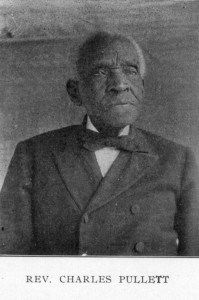 1905 Picture of Rev. Charles Pullett
Reference: Delaware Conference Minutes, 1906, .page 5, Rev. Charles Pullett. Photograph assumed to have been taken about 1905 to make it to press in 1906. Rev. Pullet died in 1908. This is the only know picture of one of Frost Pollitt’s children.

We first find Charles Pollitt in the 1850 Census in Worcester County with his wife Ann and son, Levin H. Pollitt. His occupation is listed as a laborer. I believe Caroline was his uncle Titus Pollitt’s oldest daughter. In 1860, his is now in Salisbury, Somerset Count, Maryland still listed as a labor but now with five children. Charles is listed in the 1870 Census in the little town of Vienna, Maryland on the Nanticoke River now listed as Minister of the Gospel. So it can be deducted that somewhere between 1860 and 1864 Charles heeded the call into the ministry unless he was a labor to support his family even while preaching. It is just six years after the forming of the Delaware conference of the Methodist Episcopal Church and he is assigned to the Washington Circuit extending from Preston, Caroline County, to Bucktown, Dorchester County, Md., nine appointments. Later that year he would be appointed to Odessa, Delaware.

NOTE: Charles Pullett, age 2 above, became the Rev. Charles Wesley Pullett, the third generation ministers of this family and the first to go to college. His picture was found in the Delaware Conference Minutes of 1908 in Wilmington, DE.

In the 1900 Census, Charles Pollitt / Pullett is now widowed and aged, living with his daughter Mary Elizabeth (Pollitt) Brown and her children. He was listed as a Minister even though he had retired in 1881.

Additional details again are supplied but the Delaware Conference of the Methodist Episcopal Church.

The Rev. Charles Pullett was born at Salisbury, Md., February 16, 1817, and died in Salisbury, Md., January 13, 1908. Having married Sarah Ann Houston, he and his wife lived happily together for more than fifty vears. Eight children were born to them— five girls and three boys. He joined the M. E. Church in slave days. He was licensed to preach by the white M. E. Church of his town, and for many years before the organization of the Delaware Conference, served as a preacher. When the Delaware Conference was organized in 1864 he presented himself for membership at John Wesley M. E. Church, Philadelphia. He was appointed by Bishop Edmund S. James to Salisbury Circuit and served this Circuit, extending from Laurel. Del., to Nanticoke, Md., for three years. In 1866 he was appointed to Washington Circuit by Bishop Matthew Simpson. This charge extended from Preston, Caroline county, to Bucktown, Dorchester county, Md., nine appointments. This charge he served three years. The second year he held two famous camps, one in Dorchester county and the other in Caroline county, two weeks. The result of the camps was 80 additions to the church.

In 1870 Bishop Levi Scott appointed him to Odessa, Delaware. He served Odessa, Port Penn and Delaware City for two years.

In 1872, at Whatcoat Church, Dover, Del., Bishop E. G. Andrews appointed him to Centreville, Md., a circuit of seven appointments. He served those good people for three years, and built Charles Wesley M. E. Church, at Centreville, Md. Bishop E. S. James held the Conference at Snow Hill, Md., in 1875, and appointed him to Millington, Kent county, Md., a circuit of five appointments. Here he stayed three years. In 1878 Bishop William L. Harris appointed him to Still Pond Circuit, with three churches the first year, and a fourth church organized and built at the close of his third year. In 1881 he superannuated, returning to Centreville, Md. In 1882 he supplied Centreville Circuit. In 1883 he supplied Millington Station. He again located at Centreville, Md., in 1884 and remained there until his wife became an invalid, then he moved permanently to Salisbury, Md. He was an active, helpful and acceptable superannuated preacher. His delight was to go and help the brethren, especially among the people whom he had served. He has been a father to more than a score of young men in their first appointments. Until 1903 he was an active and acceptable preacher. At the Conference in Pocomoke City, Md., on Monday morning after the close of the session, he accidentally fell and was brought helpless from that town to Salisbury, Md. He suffered intensely everything but death for two or three months. The doctors of Salisbury gave him up and advised his friends to embrace the opportunity of bidding him farewell. His life was lengthened, however, for medical aid was found in Dr. S. G. Elbert, of Wilmington, Del. For nearly five years he was unable to walk without crutch or cane. Like Job, sorely afflicted, yet with patience, he was willing and did wait all his appointed time for the change. He was patient, cheerful and faithful to the end. He never was known to murmur or complain. “He knows the way I take,” was a common saying of his.

He is survived by one brother, three sons and two daughters, a number of grandchildren and one great-grandchild. One of the sons is the Rev. Chas. W. Pullett. The daughter with whom he spent his last years is Mrs. Mary E. Brown, of Salisbury, Md. The funeral services were conducted at John Wesley M. E. Church, Salisbury, Md., by the pastor, C. S. Sprigg. The eulogy was delivered by Rev. D. R. Dunn, with remarks by Dr. P. O’Connell, Revs. J. H. Harman, E. H. Nichols and C. S. Sprigg. The following brethren assisted in the services: Revs. T. N. Cooper, Frank Trigg, Dr. W. C. Jason, D. A. Ridout, J. T. Matthews, A. L. Henry, J. F. Molock and S. Hammond.

Servant of God, well done!
Thy glorious warfare’s past;
The battle’s fought, the race is won,
And thou art crowned at last.