The Rev. Frost Pollitt’s grandson, the Rev. Charles Wesley Pullett, was most likely born on his grandfather’s farm “Morris Conclusion” in Nutter’s District, Worcester County, Maryland, not far from Fruitland. He was the first born into freedom, as both his parents were free. He was a teacher while in his teens and later went on to graduate from Morgan College and Howard University. 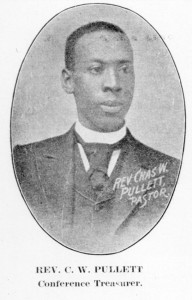 Charles Wesley Pullett was born August 14, 1859 on a farm four miles from Salisbury, Wicomico County, Maryland.
His father, the late Rev. Charles Pullett was a charter member of the Delaware Annual Conference. His mother, the late Sarah Ann Houston Pullett, was the daughter of the late Levin Houston, a prominent layman of John Wesley Methodist Church, Salisbury, Md.

His grandfather, the late Rev. Frost Pullett was also a charter member of the Delaware Conference.

Charles was the youngest of eight children in the Pullett family. He attended the public schools in Maryland and also in Delaware.
He was appointed a public school teacher at the age of fifteen years in the State of Maryland. His first teaching appointment was at Batt’s Neck, Kent County, Maryland. He taught there for four consecutive years.

While teaching there, he was converted under the administration of the late Rev. S. G. Waters. After his conversion, he early realized that he had been called to the Christian ministry. He was willing to accept the call. At the same time, he realized that if he were to be an effective minister of Jesus Christ, he had to be prepared. He resigned his teaching position and made ready for his life’s work.

He was among the first students to enter Centenary Biblical Institute, now Morgan State College. He graduated from the Normal Department of Morgan College. After finishing his Normal Course, it dawned upon him to be effective he should have a professional training. He therefore, matriculated in the Theological Department at Howard University and graduated from the same. While he was attending Howard, he joined the Central Methodist Church in which the late Dr. W. H. Brooks was a pastor. He was licensed to preach by the Rev. W. P. Ryder of the Washington Conference. He was recommended to the Delaware Conference for membership from Charles Wesley Methodist Church in Centerville, Maryland, for admission on trial and deacon’s orders both of which were granted by the Conference. The Conference that year was convened at Waugh Church in Cambridge, Maryland, Bishop W. F. Mallalieu presided.

After retiring, he joined Haven Church, Philadelphia, Pa., with his family. He took great delight in serving the church in any way he possibly could. He was greatly loved by the officers and members of Haven.
Rev. Pullett was married to Miss Laura A. Taylor of Washington, D.C. They worked faithfully together for a number of years and she was not, for God took her.

Later on, he was married to Mrs. Francis Hughes. To this marriage one son was born, Frost. The wife and mother passed away two years ago. Brother Pullett mad his home with his son and daughter-in-law and grandchildren until November 2, 1948 when God took him to dwell in His Mansion above.
He leaves to mourn their loss: A son, an adopted or step son, one daughter-in-law, grandchildren, his brother sin the ministry and a host of friends.

“There the tears of life are dried,
There the hidden things are clear;
There the work of life is tried,
By a juster Judge than here;
Father, in Thy gracious keeping,
Leave we now Thy servant sleeping.”