Frost Pollitt may or may not have been actually married. There are no records to prove he was such as a marriage license or annotation in a preacher’s book. The only reference to his wife comes from my third great grandfather’s obituary.

“Mr. James Morris, of Nutters District, in this county died yesterday morning in the 93rd year of his age. Mr. Morris was perhaps the oldest man in Wicomico Co. He has been a member of the Presbyterian Church for about 60 years and a Ruling Elder for over thirty years. He was a large slave holder before emancipation, and his humane treatment of his servants, so firmly attached them to him, that the wife of the Rev’d Frost Pollitt, refused to leave his service when her freedom was offered her.”

My original understanding of his family came from my census search. Although initially it was not clear who were family members, once all the data is viewed collectively along with other information such as death certificates, land records and Frost’s will, the family becomes much clearer.

NOTE: It is believed that Levin Robertson here is Frost’s son-in-law.

NOTE: It is believed that Levin Robertson here is Frost’s son-in-law, and Milkey is Milcha, Frost’s daughter. William is their son. The previous Dwelling and family in 1860 is that of James Morris.

NOTE: It is believed that Ed Christopher here is Frost’s son-in-law, and Ann, Frost’s daughter. All of the Christopher children aged 7 to 1/12 are their children. Stephen and Isaac Morris are believed to be Frost’s sons later mentioned in land records.

In summary, we can see that Frost had at least seven children and maybe more. Frost would have been about 28 when his son Charles was born. It is highly likely that he fathered children before then. A more thorough study of the average age that male slaves had their first child during the period 1810 to 1830 might give us a better indication if my hypothesis is correct. We do see that George was born in 1822 or five years later. He is followed by Milcah or Milkey in 1825 and was the last child known to have been born while Frost was still a slave. After Frost was manumitted in 1828, Stephen was born in 1830 and Isaac in 1832. Isaac may have been earlier as Mariah was definitely born in 1832. Ann, the youngest child, was born about 1841 when Frost was about 52 years of age. The earlier gaps between the children’s births may be because their siblings died or that Frost was traveling the country side preaching. It is important to note that while Frost’s wife or the mother of his children remained a slave on James Morris’ plantation, they were all born into slavery.

I was extremely lucky that three of Frost’s children survived into the twentieth century. It was not until after 1897 that Maryland required death certificates. I have found three of them which all list their father as Frost Pollitt. Maria’s death certificate lists her mother as Ester Burris while Charles’ death certificate lists his mother as Esther Morris. We know that the information provided for Maria was by her brother, George, and for Charles, his son, Rev. C. W. Pullett. Given these two reliable sources leads credence to the data provided. Furthermore, Esther is a variation of Easter. Frost’s wife’s maiden name may have been Burris given that his sister married Isaac Burroughs or Burris. I believe that Frost’s grandson, Charles W. Pullett, gave his grandmother’s name as Easter Morris for two reasons. She would most likely have been known by her master’s surname, as she was a slave of James Morris. Secondly, Charles W. Pullett’s other grandmother was Easter Huston, the wife of Levin Huston. Descendants’ of Levin and Esther today still debate at Sunday supper whether Levin’s wife’s name was Easter or Esther.

Reference: Death Certificates of Children of Frost Pollitt, list Esther, most likely married or started having children about 1815 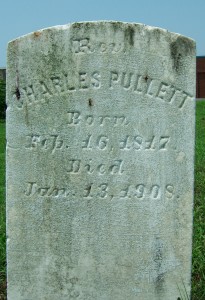 NOTE: Given the above information, it can be concluded that the Rev. Frost Pollitt’s wife remained the property of James Morris during her lifetime and either died a slave or was never enumerated on a federal census. As to her name, it is possible that she went by Morris as two of her sons, when by Isaac and Stephen Morris as well as Is by Isaac and Stephen Pollitt. However, it is most likely her first name was Ester or Easter. George Pollitt, her son, lists her name as Burris but given his age he could have been misunderstood for Morris. Or Ester / Easter may have been a Burris as this was a common name in the area. One of Frost’s sisters married Isaac Burroughs and is listed as Tamer Burris on her gravestone.

It is not until 1893 that we can get a clearer picture of the land that Frost willed to his sons Stephen and Isaac as his children Charles, George and Mariah sell it to John W. Hitch presumably after the death of their brothers, Stephen and Isaac. It does give us a collection of relationships and actions to assist us in defining this family.

Deed John W. Hitch From Charles Pollitt George Pollitt Mariah Leatherbury
This Deed made this Seventh day of July in the year of our Lord eighteen hundred and ninety three by Charles Pollitt, George Pollitt and Mariah Leatherbury, of Wicomico County, and State of Maryland, witnesseth that in the consideration of the sum of fifteen Dollars, we the said Charles Pollitt, George Pollitt, and Mariah Leatherbury, do grant unto John W. Hitch, of Wicomico County, and State of Maryland, all that lot or parcel of ground situated in Nutters Election District, Wicomico County, and the State of Maryland, described as follows; lying on the South West side of the Road leading from Ellen R. Wards to Henry Robinsons, and adjoining the lands of W. P. Morris, Levin Robinson, and the said John W. Hitch, it being the same land which was devised to Stephen Pollitt and Isaac Pollitt by the last will and testament of Frost Pollitt, their father, dated September the 23rd 1868, and recorded in Registers Office of Wicomico County, and State of Maryland, we do hereby sell and convey all our right title interest claim and demand in and to the described lot or parcel of ground containing thirty and one fourth acres of land more or less in fee simple.
Witness our hands and seals the day and year above written.

State of Maryland, Wicomico County to wit:
I hereby do certify that on this 7th day of July in the year 1893, personally appeared before me, a Justice of the Peace, of the State of Maryland, in and for the County aforesaid, Charles Pollitt, George Pollitt, and Mariah Letherbury, and did each acknowledge the aforegoing deed to be their respective act. Wm. J. Riggin J. P.

Anno Domini 1893, July 8th, There was delivered unto me the subscriber, the aforegoing deed, in order to be enrolled among the Land Records of Wicomico County which said Deed together with the acknowledgement thereof therein endorsed is accordingly enrolled among the same Records, in Liber JTT No. 11, folio 396.