Home > Frost Pollitt’s Will and Probate

Frost Pollitt’s Will and Probate

Additionally, we learn much about Frost from his will written in 1868 and probated shortly after his death in 1872. Frost names his living children in his will and states that he owns land called “Kobensey”. This may be a different portion of “Morris’ Conclusion or an altogether different tract of land. My research is not final to this respect and its answers may shed more light on Frost. Unfortunately, it does not state where he is buried.

Frost Pollitt Will John E. Robinson Exctor
In the name of God, Amen,I Frost Pollitt, of Wicomico County in the State of Maryland, being in body weak, but of A sound, disposing mind, memory and understanding, and being desirous of settling my worldly affairs and thereby be the better prepared to leave the World when it shall please God to call me hence do make and publish this my last Will and Testament in manner and form following: that is to say:
First and principally, I commit my soul into the hands of Almighty God and body to the earth, to be buried at the discretion of my Executor, herein after named, and after my debts and funeral charges are paid.
Item 1st: I give to my daughter Milkey one acre of land called Kobensey to her and her heirs forever.
Item 2nd: I give to my daughter Ann one acre of land called Kobensey to her and her heirs forever.
Item 3th: I give to my 2 sons Stephen and Isaack Pollitt the rest of my land where I now live the amount is 30 ½ acres called Kobleues to them and their heirs forever by their paying my daughter Mariah the sum of forty dollars.
Item 4th: I leave my horse on the farm for the use of the two boys Stephen and Isaac.
Items: I devise and bequeath all the rest of my Estate both real and personal to be equally divided between my 2 sons and three daughters Milky and Mariah and Ann Pollitt to them and their heirs forever.
And lastly I do hereby constitute and appoint Mr. John E. Robertson to be sole executor of this my last Will and Testament, revoking and annulling all former wills by me heretofore made, ratifying and confirming this and none other, to be my last Will and Testament.
In testimony whereof, I hereto set my hand and affixed my seal this Twenty third day of September in the year of our Lord Eighteen hundred and sixty-eight.

Signed, sealed, published and declared by the above named Frost Pollitt, as and for his last Will and Testament, in our presence who at his request and in his presence and in presence of each other, have hereto set our hands as witness thereto:

Then came John E. Robertson and made oath on the Holy Evangely of Almighty God, that the foregoing instrument of writing is the true and whole last Will and Testament of Frost Pollitt, late of Wicomico county, deceased, that hath come to his hands or possession, and that he doth not know of any other.
Before Wm. Birkhead, Reg. W.W.Co.

Then came John W. Livingston and Peter Livingston, two of the subscribing witnesses to the foregoing last Will and Testament of Elijah Pinkett, late of Wicomico County, deceased, and they made oath on the Holy Evangely of Almighty God, that they did see the Testator, therein named, sign and seal.
Recorded in Liber W.B. No.5, folios 5 & 6. 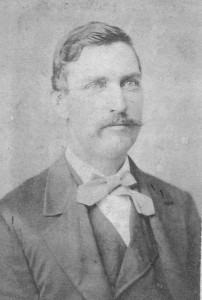 I have come to believe that my family history and that of Frost’s are intertwined based on the interweaving of events. For example, my second great grandfather, Thomas C. Morris, was appointed along with J. H.A. Dulaney to perform an inventory & appraise the personal estate of Frost Pollitt. A more detailed analysis of Frost’s property is also included in the section on Personal Property.